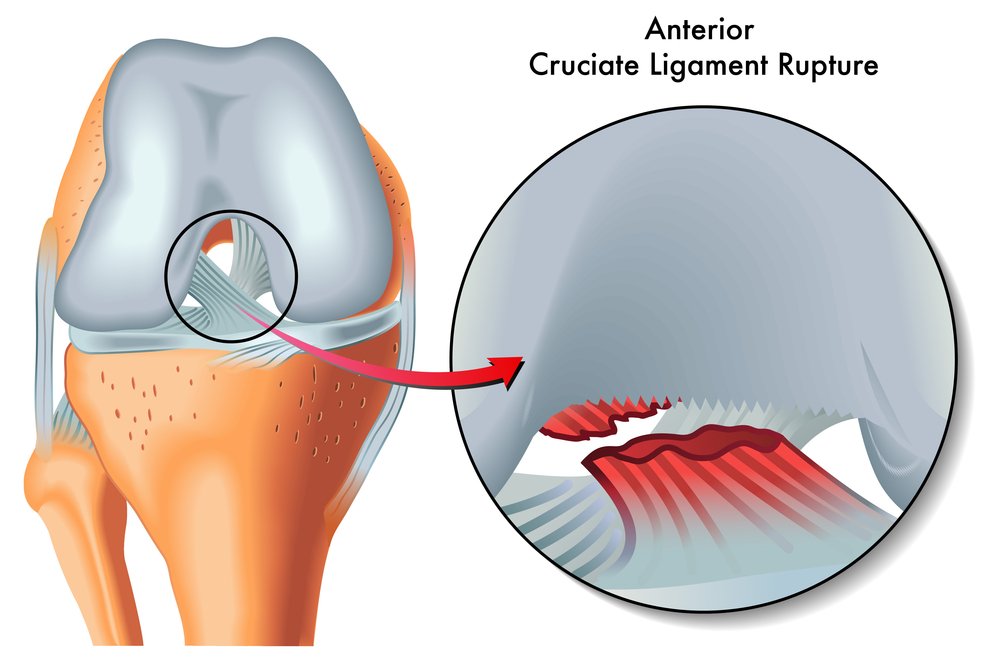 Anatomy of the knee

The knee is one of the most complex joints in the human body. Being a hinge joint it is structured to perform two principal actions, flexion (bending) and extension (straightening).

The muscles which act at the knee are predominantly the quadriceps (extension) and the hamstrings (flexion).

The knee is comprised of the bottom end of the femur (thigh) and the upper end of the tibia (shin) and the patella (knee cap).

These, along with the muscles acting on the knee provide the joint’s stability.

The ACL prevents the femur from moving forwards during weight bearing. It also helps to prevent rotation of the joint.

Injury of the ACL most often occurs when a player or athlete is pivoting, decelerating suddenly or landing from a jump.

ACL injuries can also be caused by another player falling across the knee.

Statistics show that women are more likely to suffer an ACL injury than men. The difference in rates of ACL injuries in the women’s Australian Rules competition (AFLW) compared to their male counterparts is illuminating:

The women playing in the AFLW are nine times more likely to suffer an ACL injury than men participating in the AFL.

Most athletes who experience a full tear of the ACL describe a loud sound such as a ‘pop’ or ‘crack’. This is often followed by a few minutes of extreme pain.

A torn ACL is often accompanied by hemarthrosis (bleeding into the joint space) which may be visible as a large tense swelling of the knee. Examination of the knee is more easily done within the first hour following the injury before the development of hemarthrosis.

Presenting for medical assessment as soon as possible after injury is recommended even if significant swelling has occurred.

Athletes with a torn ACL often have severe restriction of movement, particularly extension.

Other knee injuries such as damage to the meniscus (knee cartilage), and the medial or lateral collateral ligaments may also accompany a torn ACL.

How to manage an ACL injury

The immediate treatment of any soft tissue injury consists of the RICER protocol – rest, ice, compression, elevation and referral. RICE protocol should be followed for 48–72 hours.

The aim is to reduce the bleeding and damage within the joint. The knee should be rested in an elevated position with an ice pack applied for 20 minutes every two hours (never apply ice directly to the skin). A correctly sized compression bandage should be applied to limit swelling and bleeding in the joint.

The No HARM protocol should also be applied – no heat, no alcohol, no running or activity, and no massage. This will ensure decreased swelling and bleeding in the injured area.

A sports medicine professional should be seen as soon as possible to determine the extent of the injury and to provide advice on treatment required.

A sports medicine professional may perform a physical examination and take x-rays of the knee.  An MRI test may be recommended to confirm the diagnosis.

Returning and rehabilitation from an ACL injury

Surgery is the most likely path to take.

Surgical reconstruction is a very common method used to repair a completely torn ACL. This usually involves replacing the torn ACL. Various factors are considered when deciding on whether to surgically reconstruct a torn ACL.

Rehabilitation for a reconstructed ACL will be conducted under the direction of an orthopaedic surgeon and the supervision of a physiotherapist.

A number of rehabilitation program schedules exist however more recent programs commence with a schedule of protected mobilisation, followed by strengthening activities and ultimately progress to functional exercises. This rehabilitation usually takes between six and nine months.

It is recommended that athletes with reconstructed ACL injuries return to sport with the approval of their orthopaedic surgeon. This is usually when strength, range of motion and co-ordination are nearly at full capacity.

The information above is general in nature and is only intended to provide a summary of the subject matter covered. It is not a substitute for medical advice and you should always consult a trained professional  practising in the area of sports medicine in relation to any injury.

You use or rely on the information above at your own risk and no party involved in the production of this resource accepts any responsibility for the information contained within it or your use of that information.